Skip to content
Last Friday night, we ‘rolled’ in to the new Buffalo RiverWorks arena to watch the opener of the Queen City Roller Girls (get it? rolled in? we think we’re punny!). We have been talking about watching a roller derby game since last year and finally made the vow to attend one- especially now that their new rink home is within Silo City in Buffalo.

You probably have been hearing a lot about RiverWorks, notably the ‘six-pack’ of Labatt cans painted on tall, skinny silos (love ’em or hate ’em…) that sit next to the new ice rinks and derby rink with a future brewery coming soon and much more. It is the newest destination point in downtown Buffalo and has a ton of potential- we are looking forward to seeing the next steps take place! The two ice rinks are covered, open-air spaces used for open skates, skate & shoots, and curling. The arena where the Queen City Roller Girls (QCRG) play is not quite finished yet but it made no difference while there- us Buffalonians love changes and updates so we ignore dust and debris!

Located on Ganson St., we parked and discovered the arena entrance is to the far right side of the building. Upon arrival, we walked in an felt like we were at Fight Club. People everywhere, a cement rink, construction all around, chairs set up, and work lights scattered along the sides giving it the feel of being in an underground warehouse. Guy bird instantly commented on the film and referenced the famous quote with a QCRG twist:

‘I feel like Tyler Durden [Brad Pitt] is somewhere in here! This is bad ass! ‘First rule of Roller Derby: you do not talk about Roller Derby!!!’, and proceeded to crack himself up.

But he was right- the feel and look was Fight Club-esque and rightly so: these girls are bad ass. We got there early so we could get a great seat and ended up barreling toward the front row for celebrity seating and action-packed views. Tonight was the opener for the QCRG at their new home and it was the Nickel City Knockouts vs The Suicidal Saucies. QCRG started in 2006 after being inspired by the A&E series ‘Rollergirls’ and the whole club has over 120 participants that skate, coach, and ref. Beginning at the North Tonawanda Rainbow Rink, they hold weekly practices, games, and tournaments. You can join the girls NOW and begin March 1st for their bootcamp. You do not need to be experienced- just have the passion. Once you pass your assessment, you get to join up officially. Do it here.

Warm ups began with the NCKO, finished with Suicidal Saucies. We were getting a kick out of everyone’s names (side note: roller derby names are typically a play-on-words for each nickname, often clever and feisty): Abercrombie & Fists…Little Orphan Angry…Bear Lee Legal…June CleaveHer…Bully Holiday to name a few. We couldn’t help but be reminded of Drew Barrymore’s character ‘Smashlee Simpson’ in her film ‘Whip It’. Padded and costumed up, the girls were ready to go. Mind you all- we are learning exactly how this games works. We felt so out of place- it was great! RiverWorks was packed with people and it looks like there will be a concession area up & running soon and a few table areas near it along with a mezzanine to open within the next couple of weeks.

Whistles blow & it begins! These ladies can skate. You’re blocking, you’re jamming, you’re skating backwards, you’re falling on your face and butt and arms (ouch?). The skill and plays were beyond our understanding- but don’t worry, guys- we will be filling you in soon enough after we catch a few more games! With two 30 minute periods, the final score was Knockouts 207, Saucies 152. Taking severe jams, the ladies are aggressive and fun to watch- definitely an experience you must check out! We can’t wait to go again!

You can check out the QCRG schedule here and also purchase tickets. For now, please dress REALLY warm as it was very cold inside the arena. (heat should be up & running soon) Next derby: this Friday February 13th, 2015.

*February games taking donations at door, as well, for the Food Bank of WNY

*where to eat after, nearby: The Swannie House (cash only), Ballyhoo, Lagerhaus95, Iron Works 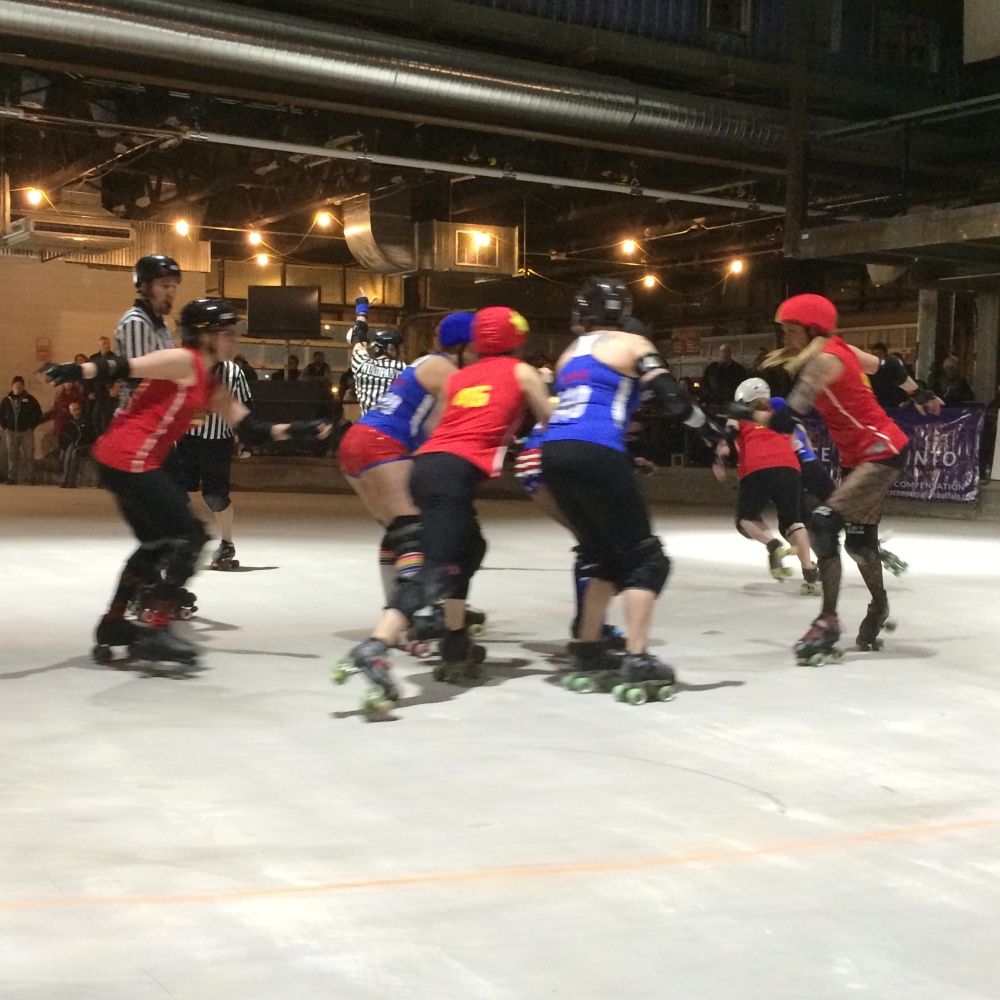