This ain’t our first rodeo. Now that we are cookin’ up baby #3, I’m definitely able to determine what has worked for our first two kids and can instantly rattle off the must-haves for you baby registry. You guys ask time and time again so I figured it was time for an updated post on our baby must-haves! 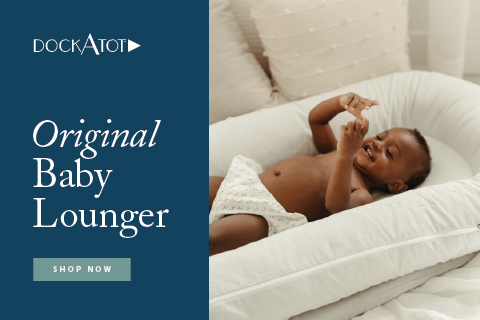 We had read studies on how babies loved the womb-feeling even after they arrived Earthside, so we checked out a few brands in late 2016 before Chloe arrived to see what was out there. The Dock popped up on my Instagram feed and we decided to try it out. Both babies have loved it and have slept in it as newborns before transitioning to their cribs. Chloe didn’t even like her bassinet! Only the DockATot! It is very easy to clean and you can order a travel case for it, which we have used on family trips. We have the Deluxe dock which both kiddos outgrew around 6 months (we have long kids) but there is a larger option called the Grand which can be used through toddler age. It is great for travel, naps, visiting someone else (instead of that big pack & play!), and co-sleeping if you choose to do that in the beginning.

Another Instagram find! Beau and I had decided we didn’t want to lug around heavy car seats outside of our vehicles, so we looked at other options for carrying babies and also what to do with them before they are able to sit up by themselves in shopping carts. Enter: the Binxy Baby! It’s a hammock that attaches in any shopping cart and let’s the baby ‘hang out’ while you shop. We love it because it rolls up, can be put in the wash, doesn’t hurt our arm, and you still can use lots of cart space without a big ol’ car seat taking up all the room. If you do like car seat options, the Binxy Baby holds up to 50 lbs and the seat can be placed in it so it is up and off the cart bottom. Like I mentioned, our babies are long so we can get about 6-7 months use out of the Binxy before they’re too long but each baby’s size is different. Soon enough, you’ll be able to transition baby to the front seat since they’ll be able to (most likely) sit up with a little support.

This has to be funniest and most awkward baby must-have out there! From the Fridababy line, this snot-sucker is simple and really works. And NO you don’t get boogers in your mouth. Babies cannot blow their nose and sometimes we can’t reach all that gook so you need to have some suction to clear out their tiny noses without hurting them. We haven’t had to use it much, but it was super handy when we had to!

Thanks to Grandma, we have a caddy right next to the changing pad downstairs that is filled with diapers, butt cream, wipes, and binks. It’s felt material and also portable. We have it stationed in our house but have used it on road trips and have taken it to other rooms if needed. It holds alot more than you would think and it’s more compact than a big cart or shelves that you can’t take with you. The Parker version here is more sturdy than other knock-offs. We had both baby’s diapers in each compartment for a couple month which made it easy!

If you are formula-feeding, this pitcher is a must! It’s a mixing pitcher than mixes the water and formula with a few quick swipes so you don’t have to shake your own. It holds over 32 oz. of formula so you can leave it in your fridge until it’s time to replenish. We also pop this in a cooler in the summer with ice so we can just keep refilling bottles without a mess.

You’ll learn quickly as a new parent that baby will drop, chuck, and throw everything. Getting toy and bink clips are a must if you want to 1.) not have things lands on the gross floor 2.) do not want to lose a bink. We have some from BuyBuyBaby and for cuter ones, we tend to pick some up at local shops like Main + Downing. We’ve also ordered from online boutiques like Spearmint Baby and Maisonette. The silicone ball ones are also great for when baby is teething.

We were so pumped when we learned about the phil & teds Stroller line and all of the capabilities. When it was just Chloe, we had a Thule in-line jogger that we had a horrible experience with (locking wheel, kept pulling to side, not smooth, customer service was not helpful or friendly…) but when we knew we needed a double, we had specifications: a stroller than can accommodate growing children, is in-line, not super heavy, compact, and easy to clean. In comes the phil & teds line and we went with the dash stroller. You can purchase whatever parts and accessories you need- it’s like a mix & match set up. We went for the carrycot for the infant, the double kit (which transitions baby to a seat upright), and cupholder accessories. As a New Zealand company, we love it because it is not like ‘the rest’ of the options in the USA- the design is more forward-thinking and definitely for on-the-go families. We are so happy with it!

Get this and keep it in your baby bag! We have whipped this out in random places where there is no changing table and it gives you somewhat of a safety pad for wiping baby butts. You can clean it easily and it folds up perfectly so there is no room wasted.

Ergo Carrier and Wraps (your preference, if not both!)

We are baby-wearing parents and find it to be much easier than stroller or car seat carrying. Beau loves wearing the Ergo (more sturdy) and carrying the babies. I actually think he may be obsessed! I have two wrap carriers (one in baby bag, one in the car) but I don’t use them much because I have a bigger chest and it doesn’t quite work for me. BUT I would suggest having at least one because you never know what situation you will be in. I wore Jack Fox at the playground when he was a newborn so I could help Chloe but also have him with me without having to worry about chasing a toddler and leaving a baby in a stroller.

No, really. I don’t think you can have too many. We get the cloth Gerber ones that also can be used as cloth diapers. With the amount of laundry you do, you just always need a burp cloth (or 5) handy. We keep several in the baby bag, some in the nursery, and a bunch downstairs where we mainly are. They’re thicker, last through tons of washes, and are great for spit up, throw up, and poop. You think you have a lot on your registry? Add like 6 more packs. Sure, get the cute ones for public or a selfie- but have those plain white ones as your main source of spit collecting! They’re a little tough to find in Target so I started ordering online so I wouldn’t get so flustered.

Onesies That Zip or Magnetize

When you’re half asleep at 3:30am after a feeding, you’ll be thankful for zip ups and magnetized onesies. I’m all for cute buttons and snaps but at night? Nope. Don’t put yourself through torture. Make sure your newborn has super easy clothing at night time so you don’t find yourself cursing at the 20 snaps you need to do before you can fall back asleep for an hour. Get ALOT of them. These are as imperative as burp cloths.

Things We Never Used But Thought We Would

Why not? Not sure. We heard from so many people years ago that they loved it and hated it all at once because the bag could break open if you weren’t careful and poop would be everywhere and it would smell awful. No thanks! We ended up getting one and set it up and it’s been sitting in the nursery untouched since 2017. We hope to give it a new home…

We aren’t big on clunky things, I guess. Lots of people like this option but we thought it seemed daunting to us so we opted for the DockATot for naps and a pop-up tent for travel sleeping when babies are bigger. So much easier. Some like it because it blocks the kid in. We never have felt the need. Either the baby was in the middle of the bed or we just watched our babies roam.

Chloe didn’t like her bassinet as a newborn so we went straight for the DockATot option (which we thought would just be used at the grandparent’s house for naps) and we never looked back. We never even set it up for Jack Fox- we figured we would try the DockATot first and it worked- again! It’s the same having the baby in the room to grab them for night feeding. We just keep our baby in the bed for a couple of months in the dock until it’s crib time.